This Midwestern pet food manufacturer required assistance in renovating their facility that was built more than 30 years ago. The initial mill building portion of the facility was built in 1987 with an addition almost double the number of storage bins performed in 1994. For this project, ADF conducted a structural review of the original designs and engineering to modify the structure to support tripling the original design’s weight bearing capacity for denser pet food storage.

ADF provided several structural engineering services to the client during the project:

Our client was appreciative of ADF’s flexibility in design and eagerness to provide solutions for various challenges on site. Their contractor also provided positive feedback on the constructability of the structural design presented by ADF. 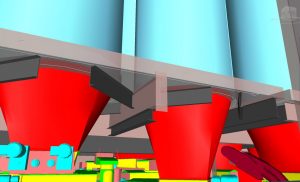